As some of you know, I initially began my blogging adventure through a different site (RIP), way back around 2012 (around my second year in Armenia). When I began Vegan Armenian Kitchen, I decided to shift everything over here, and my blog tab was ready, waiting to be filled with musings, reviews, and more. It’s been over four years since the launch of Vegan Armenian Kitchen, and yet the blog remains barren—or actually, invisible to the non-admin eye.

My focus has understandably centered around cooking and recipes, especially as I work on a new project (details coming soon!). When I was working on The Vegan Armenian Kitchen Cookbook, being busy in the kitchen and writing would go hand-in-hand. There was no choice, really. Work during the day, go straight into recipe development or testing while aggressively taking notes (those were fun to decipher later), and follow it up with writing well into the wee hours of the night.

After the cookbook was released in early 2020, beyond baking for my new project, all I was doing was daydreaming about blogging again. About the topics I would cover, the fun Armenian food traditions I could write about, relevant products/services I could review, and the people or businesses doing amazing things I would interview and profile. Sometimes, the ideas would come to me in a light-bulb-esque moment during a walk where I was still a long way from home. In this case, I would repeat the idea in my head until I power-walked to the nearest pen and piece of paper, effectively canceling out the relaxing intent behind the walk.

But usually, the ideas would come to me as I was knuckles-deep into the kneading process, or waiting impatiently for a new cake’s final moments of baking to come to an end, or doing some mundane task necessary for the good outcome of a recipe.

On one occasion of a particularly good idea coming to me at an inconvenient time, I was peeling chickpeas for a perfectly smooth topik shell (probably right after cursing that I hadn’t remembered to charge my iPod). I couldn’t help but smile as the situation reminded me of an Armenian poem sent to me by linguist Sosy Mishoyan of Western Armenian Online. About a year and a half ago, Sosy, who is thanked in the cookbook for kindly using her expertise to edit all of the Armenian in the book, had sent me Zahrad’s poem about an Armenian woman cleaning lentils. You can see the original Armenian poem, as well as the English translation, Sosy sent me below: 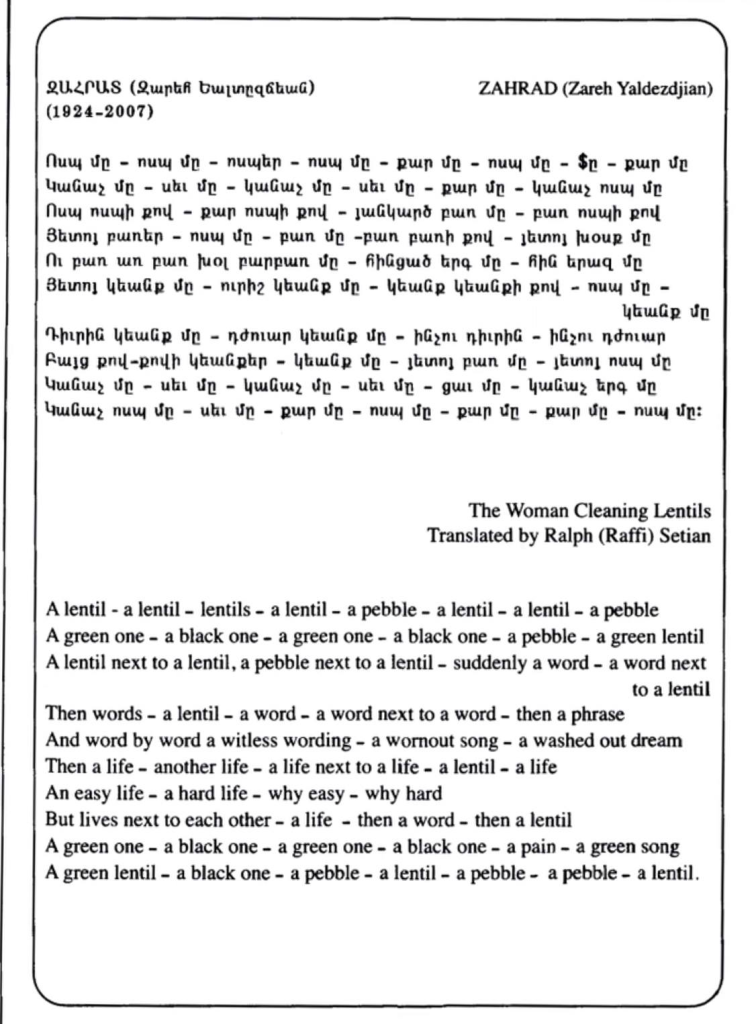 I loved that this reminder came to me doing something so similarly mundane as cleaning lentils, which, as we all know, is an important—but often skipped—step in the making of the classic Red Lentil Soup. I adore how this poem perfectly demonstrates the wandering of the mind to both big and small things while, at the surface level to anyone else, a woman is simply cleaning lentils.

When Sosy and I initially spoke about this poem, she let me know there are also some interesting folk theories on the origin of the actual word khohanots (խոհանոց), which means kitchen in Armenian. While it is not a proven theory, some believe that the word, broken down, can also translate to a “place to think deeply” since khoh (խոհ) is connected to the word khorhel (խորհել), meaning to think deeply/pensively. She told me that since a kitchen was traditionally where Armenian women would often find themselves, alone or gathered with fellow women of the family, it became a place to think, to discuss, and plan—all while seemingly occupied with the task of preparing food….a perfect cover. She added that the poem above sums up the idea perfectly as a woman is simply (or seemingly so to the untrained eye) cleaning lentils by collecting any small rocks or debris in the bunch. Her thoughts range from the work she is doing, to a number of different topics and ideas, and for an outsider looking in, she is simply a woman cleaning lentils, preparing for a meal.

I loved this theory. I quickly rushed to tell my historian friend Sarkis (everyone needs to have a historian friend) the news and was dramatically deflated when he said it was untrue and the word stems from the word “pit”. He said:

“It’s related to khohorel, it’s related to khor (pit) referencing to tonir pit. Also there is a relation with khorovatz which means made in the pit. However, linguistically khohanots and khorhel have the same root but not the same meaning. Historically all the tonir in Armenian households were made in their living rooms and everything was cooked there.”

Just when I had begrudgingly accepted this, Sosy swooped in to offer some hope for the folklore. She sent me this dictionary excerpt which shows there are two meanings behind the word khoh. The selections are underlined in red:

“It shows that the word khoh has two meanings: thought, and a second meaning derived from Farsi, cooking. Combining these two meanings together, people assigned the definition to the word khohanots.”

“Is it not the case that women spent so much time in the kitchen, and while cooking they were deep in thought? Demonstrated in Zahrad’s poem, you can see how far the woman’s mind travels as she picks lentils…she ponders about life, her past, present, and more…”

I checked Nayiri Dictionary (a great Western Armenian dictionary/resource) and saw the exact same definition, as they also reference the dictionary Sosy used, which is Armenian linguist Stephan Malkhasyants’ Armenian Explanatory Dictionary (1944). However, I did not see any mention of this dual meaning when actually looking at the word khohanots in the same dictionary (see here), just the standard meaning of it being where the food is made. I did, however, learn a new joke that was included in the same section, when the term khohanots is used to mean cuisine:

You can also read an entertaining discussion here on the connection between both words. One person jokingly asks, “is it not called as such because we are always thinking about what to make?”

While a historian and linguist may not see eye to eye on this topic, I think the potential meaning behind the word is at the very least a thoughtful theory that is seemingly applicable when it comes to the Armenian kitchen. When I think about so many classic Armenian dishes, I notice how they are in nature collaborative recipes, with the expectation that it will be a group effort—a bunch of family members, relatives, or friends splitting up the tasks, or teaming up to tackle them one-by-one, making them less daunting. The careful rolling of so many grape leaves required in the making of tolma, the stuffing of filling in so many carefully cut out squares of dough for mantabour, the 6+ hours of beating and stirring required in harissa‘s signature smooth consistency…the list of course goes on and on. Maybe that’s why so many Armenian classics are made in such large batches, are time-consuming, and are best worked on with multiple people—so that there is ample opportunity to think, discuss, plan. Quite a few of our sayings are about patience in the kitchen as well…ուշ լինի նուշ լինի (let it be late, let it be sweet), համբերէ որ համ բերէ (be patient so that it brings flavour)…

And, thinking about the ever-common response of achki chap (measure with your eyes) that you’ll almost certainly hear from Armenian cooks when you begin to ask too many questions about a recipe….well, with all the planning, reflecting, and pondering going on in the kitchen, who would have had the time or energy to focus on something as trivial as measurements?

But alas, these are just some theories to think about of course…

So what exactly can you expect from this blog going forward? There will be plenty of reviews, profiles, and interviews, as well as similar reflections from thoughts that come to me while I am peeling chickpeas…or cleaning lentils.